Luckily at McAnally’s Pubcast, we have tons of talented guests. We introduce you today to our friend Michael from @veekerstudios on Instagram, whose passion for showcasing his interests through art shines through in this project. A newcomer to the Dresden Files community, he’s a big fan of Sanya and White Knight. He has a knack for creating customized models that tell a story and has recently completed a massive project set in the Alien universe, so be sure  to check out his Instagram! Alternatively, you can find Michael hanging with us in multiple episodes, starting with 5.6!

Michael gifted me this model amidst his Dresden-Files-Summer-Binge, and it became the instant jealousy of our Dresden-obsessed circle. It sits proudly on my shelf, surrounded by everything else Dresden. Michael has been insanely kind enough to write out his process on building the Beetle, which you can find below. Without further ado… 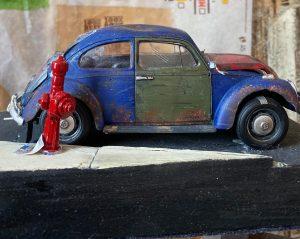 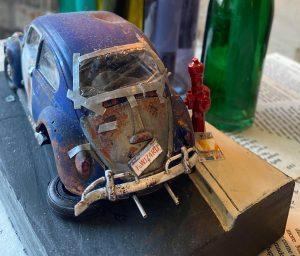 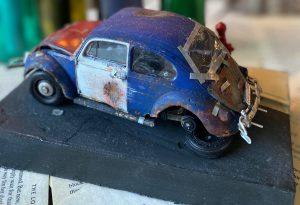 “The Beetle, stalwart crusader against the forces of evil and alternative fuels”.

Creating Harry Dresden’s Blue Beetle in miniature was one of my favourite modelling projects, so I am thrilled to have been asked to write this blog post detailing its construction. This model roughly represents the Blue Beetle as it would have looked at the end of Proven Guilty, though it is primarily a compilation of the Blue Beetle’s most iconic appearances. This project let me use my research and modelling skills to capture my excitement for the series and produce a gift for Jessica to thank her for introducing me to the Dresden Files.

All great gifts require sacrifice, and the chosen victim in this case was a Tamiya model 24136 1/24 Tamiya VW 1300 Beetle. 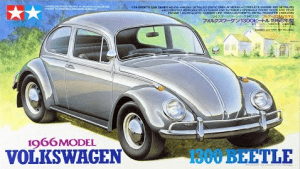 I mostly built it according to the instructions, albeit with plenty of modifications added along the way. Let’s begin with the externals. I started by researching and applying the various damages the Beetle had suffered. The bumpers and body have received plenty of hard knocks in the books, and doubtless many more that Harry did not deem exciting enough to inform us about, so I started by adding these deformations. To apply these damages, I heated up the pieces over a candle to make the plastic soft and malleable. I then used the hobby knife of my handle to bend, dent and contort these poor parts.

The hood got it the worst, as Harry fearfully describes how the Chlorofiend’s fist crumpled the hood like tin foil in Summer Knight. We know in Dead Beat that Mike Atagi had since repaired the hood and repainted it in grey primer, but I broke with accuracy here to retain this distinctive feature. Sue me. We learn in Death Masks that Harry has resorted to keeping the hood closed with wire from a coat hanger.

The clear components weren’t saved from the grave peril of this destruction. The headlights got smashed up by cutting the lenses in half and carving cracks in the glass. The back window was shot out at one point, so I simply left this part off the model and used a piece of clear kitchen wrap to depict a cost-effective repair Harry may have made. Incidentally, adding this last also let me access the interior of the model after I glued the body on the chassis to do some last-minute touch ups.

Choosing colours was not an issue; choosing where to apply those colours was. My notes on colour placement devolved into madness as the series progressed, so I went with what I liked best. This is largely the colour layout seen in Storm Front, but I did choose to make the trunk an inaccurate silver. This was done because yellow, as mentioned in Dead Beat, is an absolute pain to paint smoothly, and the dark silver complemented the other colours so nicely.

I don’t remember what colours I used on the inside, but I do remember enjoying turning the interior into Harry’s mobile office.

Harry explains in Blood Rites that mold demons ate the interior, and his conversation with a disgusted Thomas informs us of the absolute horror Harry expects his passengers to endure. I cut pieces off the vinyl seats, cut holes in the dashboard and ‘repaired’ them with scale stripwood, removed the backseat, and used a chisel to remove any details that looked easy to damage. I did elect to not model Harry’s innovative wood-and-camping-gear seats for the sake of time, and instead focused my efforts on the backseat. There’s a blanket back there, probably to give Mouse the comfy ride he deserves, and I cut a piece from old plaid pajamas to fill this role.

Harry’s tools of the trade were another fun challenge to create. My family grew up playing with Playmobil toys that just so happen to be roughly 1/24 scale, and I secretly looted our toy stash to find parts that looked like they belonged in the Beetle. From this search I acquired parts to depict Harry’s revolver, a book that I repainted into a bible, bags to hold holy-water balloons and some bottles of Coca-Cola.

With the model assembled, it was time for the finishing touches. These included a liberal application of the handyman’s secret weapon: duct tape. Thankfully, real duct tape scales well and is self-adhesive, so it was easy enough to cut small pieces from a roll and apply it to the model. I used Microsoft Word to produce a replacement licence plate suitable to Harry’s tastes. 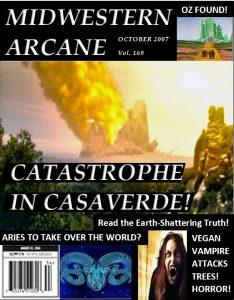 Every chariot needs a battle ground to roam. I created a diorama out of insulation foam and poster board I carved and painted to represent the streets of Chicago, framed by balsa wood painted black.

Crime, let alone magical crime, has a nasty tendency to disregard parking conditions, so I built a fire hydrant out of various bits and bolts to capture Harry’s frustration with rules. But fear not respectable citizens! He has received a parking ticket in the form of a fragment of a yellow notepad slipped under the wipers.

Finally, Chicago, being the windy city that it is, has plenty of papers and magazines flying about, and one curious magazine [also made in Word] has found itself trapped against this particular fire hydrant (see the above magazine mock up).

Jessica and I read Changes together on the day I gifted her this model, which just so happened to be the book where a Ik’k’uox crushed the Blue Beetle to smithereens. Consider this model as my tribute in memoriam to our beloved Blue Beetle; You shall ride eternal, shiny and chrome.

I take great pride in the community’s reception to this model, and am considering beginning another Dresden Files-themed project soon. In the meantime, please leave any comments or questions you have down below, and I might respond to them in an upcoming podcast. Thank you for reading! 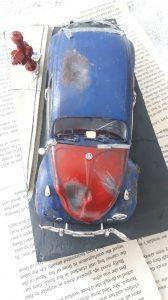 Seek and ye shall find

Scroll Up
We use cookies on our website to give you the most relevant experience by remembering your preferences and repeat visits. By clicking “Accept”, you consent to the use of ALL the cookies.
Do not sell my personal information.
Cookie settingsACCEPT
Manage consent

This website uses cookies to improve your experience while you navigate through the website. Out of these, the cookies that are categorized as necessary are stored on your browser as they are essential for the working of basic functionalities of the website. We also use third-party cookies that help us analyze and understand how you use this website. These cookies will be stored in your browser only with your consent. You also have the option to opt-out of these cookies. But opting out of some of these cookies may affect your browsing experience.
Necessary Always Enabled
Necessary cookies are absolutely essential for the website to function properly. These cookies ensure basic functionalities and security features of the website, anonymously.
Functional
Functional cookies help to perform certain functionalities like sharing the content of the website on social media platforms, collect feedbacks, and other third-party features.
Performance
Performance cookies are used to understand and analyze the key performance indexes of the website which helps in delivering a better user experience for the visitors.
Analytics
Analytical cookies are used to understand how visitors interact with the website. These cookies help provide information on metrics the number of visitors, bounce rate, traffic source, etc.
Advertisement
Advertisement cookies are used to provide visitors with relevant ads and marketing campaigns. These cookies track visitors across websites and collect information to provide customized ads.
Others
Other uncategorized cookies are those that are being analyzed and have not been classified into a category as yet.
SAVE & ACCEPT